Permissions and Reprints All articles of this category 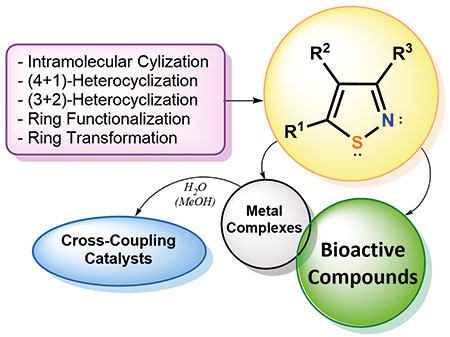 The chemistry of isothiazoles is being intensively developed, which is evidenced by the wide range of selective transformations involving the isothiazole heterocycle and the high biological activity of its derivatives that can be used as effective new drugs and plant protection chemicals. Some representatives of isothiazoles have proven to be synergists of bioactive substances, which opens the way to lower the doses of drugs used and is especially important in cancer chemotherapy. In the framework of the present review, the accomplishments in the chemistry of isothiazoles over the past 18 years are examined, whilst current strategies for the synthesis of isothiazole-containing molecules and key directions of studies in this field of heterocyclic chemistry are discussed. Considerable attention is paid to chlorinated isothiazoles and strategies for their use in the synthesis of biologically active substances. In addition, a comprehensive review of existing literature in the field of metal complexes of isothiazoles is given, including the results and prospects for the practical use of isothiazole–metal complexes as catalysts for cross-coupling reactions in aqueous and aqueous–alcoholic media (‘green chemistry’).